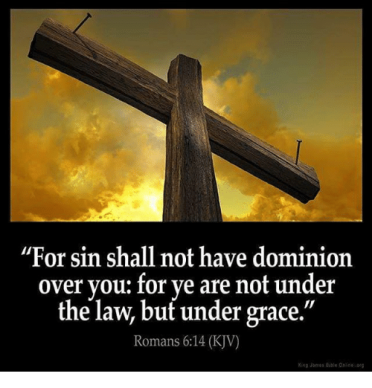 Even born again Believers are subjected to the result of sin because of Adam’s fall. There is no such thing as sinless perfection this side of glory. Gray hair and wrinkles are a result of sin; not necessarily the individual’s sin but Adam’s original sin. Sickness and death are the result of sin. The result of sin is not just drinking, smoking and homosexuality. Sin’s power over the Believer doesn’t necessarily reveal itself as that which is sinful but that which is ‘right’ in their own eyes. Such is the leaven which leavens the lump. Seeing they see not and neither do they hear nor understand that sin’s dominion (the result of sin) is in fact dominating in their life.
As many religious folk declare and decree their sinless perfection, they in fact remain dominated by sin’s result because they do not realize nor understand their faith is in their doings. The ‘good works’ of which they do and the ‘lifestyle’ of which they live is deemed sufficient to cover their transgressions, the same transgressions of which the Bible calls sin (self righteousness, pride, gossip, slander, etc.).
The modern church has Believers who are beaten down with the results of sin and they are doing nothing more than offering distraction methods to comfort them in their heavy burdens. They do not preach life nor liberty in Christ Jesus but exhort them to lie to themselves and God about the condition of which they are in. At Calvary, Jesus Christ bore the burden of our sin. The power of sin was broken for whosoever will believe upon the Lord Jesus Christ. We are no longer dominated by sin NOR the results of sin.
The dominating effect of sin which have exercised influence over the life of the lost and many Believers is laid waste by the Cross of Christ. However, the majority of Christians do not place their faith in the Cross of Christ for power to break sin’s dominion and have followed worldly statutes, namely humanistic psychology, for their victory. The result is the Believer either becomes comfortable in their sin and sin’s result continues to reign and rule or they reject this form of ‘godliness’ and seek after another where they are comfortable.
There is but one answer to the result of sin’s penalty and power and that is Jesus Christ and Him crucified. Lift HIM up!!

“18 The Spirit of the Lord is upon Me (Jesus), because He has anointed Me to preach the Gospel to the poor; He has sent Me to heal the brokenhearted, to preach deliverance to the captives, and recovering of sight to the blind, to set at liberty them that are bruised, 19 To preach the acceptable year of the Lord.” Luke 4:18-19

If the power of the Lord is upon you to preach, you will preach the Gospel to the poor and not just treat the symptoms of sin’s result; you will see the broken in spirit and in body  healed in the Name of Jesus and you will preach deliverance through the Cross of Christ to those who are bound by the power of sin and see those who no longer see recover their sight.

If the power of the Lord is upon you to preach, those who are broken and bruised by sin’s dominion will be set at liberty by the Cross of Christ and sign and wonders will follow (not lead).

If the power of the Lord is upon you to preach, you will preach the Gospel of Jesus Christ and Him crucified.

“Preach the Word; be instant in season, out of season; reprove, rebuke, exhort with all long suffering and doctrine.” 2 Timothy 4:2