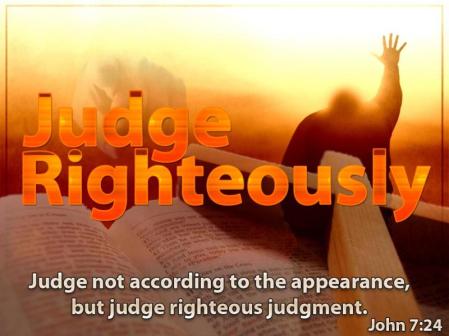 “My brethren, have not the faith of our Lord Jesus Christ, the Lord of glory, with respect of persons.

2 For if there come unto your assembly a man with a gold ring, in goodly apparel, and there come in also a poor man in vile raiment;

3 And you have respect to him that wears the gay clothing, and say unto him, Sit you here in a good place; and say to the poor, Stand you there, or sit here under my footstool:

4 Are you not then partial in yourselves, and are become judges of evil thoughts?” James 2:1-4.

One who esteems one above another based on appearance is at the same time being bought by the appearance they prefer.  We must recognize what is vying for our affections and judge righteously according to the Word of God, not according to appearance.

“Judge not according to the appearance, but judge righteous judgment.”  John 7:24.

Judge righteously.  Don’t be bought by the appearance of others.  The devil himself comes as an angel of light but he is still the devil.

“13 For such are false apostles, deceitful workers, transforming themselves into the apostles of Christ.

14 And no marvel; for Satan himself is transformed into an angel of light.

15 Therefore it is no great thing if his ministers also be transformed as the ministers of righteousness; whose end shall be according to their works.” 2 Corinthians 11:13-15

Consider how your affection has been purchased.  Was it according to righteous judgment or political correctness?  One is of the world and the other of God. Prayerfully consider.