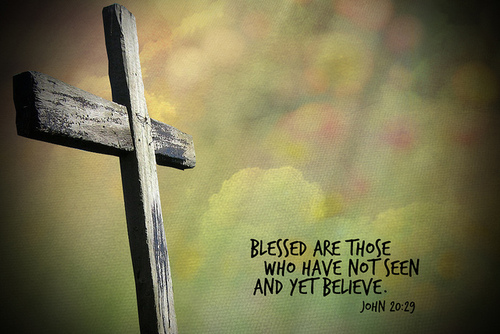 “Jesus said unto him, Thomas, because you have seen Me, you have believed: blessed are they that have not seen, and yet have believed.” John 20:29

Belief, which is a verb, is the action part of faith, which is a noun.  Faith not put into action will bless no one.  I will probably get a hardy “amen” from many in the works based religions.  However, please understand the action I speak of is belief.

“And the Scripture was fulfilled which said, Abraham believed God, and it was imputed unto him for righteousness: and he was called the Friend of God.  You see then how that by works a man is justified, and not by faith only.” James 2:23-24

Faith when proclaimed merely as a dogma or creed without belief is dead.  Now I’m speaking to you, my “Message of the Cross” friends.  Many of us have come to the knowledge of Grace through faith for dominion over sin but haven’t yet believed.  We have the faith but have not put it into action through belief.  We know that Righteousness is not an activity but a Man…THE Man Christ Jesus and it is HIS Righteousness imputed to us through our belief in Him as our Lord and Saviour.  We now understand the difference in our works based religion and grace through faith but have yet to understand the difference between faith and belief.  I include myself in this group…there is no graduating class this side of glory.  We are all learning precept upon precept, line upon line.

Many have made the preaching of the Cross of Christ a creed and no longer a belief and their fruit is beginning to wither away.  Faith without active belief cannot produce Salvation (John 3:16), nor can it produce the Victory of which we so often proclaim.  Sadly, some are no longer growing in Grace and knowledge because their faith is not active…they do not believe.  They will strongly deny this fact because they do have faith…but faith in what?  Where their faith is “active” is what they believe. God only recognizes faith in Jesus Christ and His redeeming work.

“I am crucified with Christ: nevertheless I live; yet not I, but Christ lives in me: and the life which I now live in the flesh I live by the faith of the Son of God, who loved me, and gave Himself for me.” Galatians 2:20

I want you to notice something in this Scripture, we “…live by THE faith OF the Son of God…”.  You see, faith is a noun and belief is an action.  I’m not speaking of Salvation here but of the Child of God’s victory in day to day living.  The faith placed in philosophies, which could also be stated as ‘the faith of philosophies’, our flesh will easily believe but this faith will not produce life…it may produce “works” but they are dead works birthed from dead faith.  Faith without works is dead…dead faith.

I hope at least some of you understand what I have clumsily tried to say today.  Don’t make the preaching of the Cross of Christ a dogma.  BELIEVE in the Cross of Christ and allow THE faith OF the Son of God, Jesus Christ, to produce in you life and labor according to God’s Word and His work…we are HIS workmanship.

“For we are His workmanship, created in Christ Jesus unto good works, which God has before ordained that we should walk in them.” Ephesians 2:10

Blessed are they that have not seen, and yet have believed.  Have you believed?

1 thought on “HIS Workmanship”