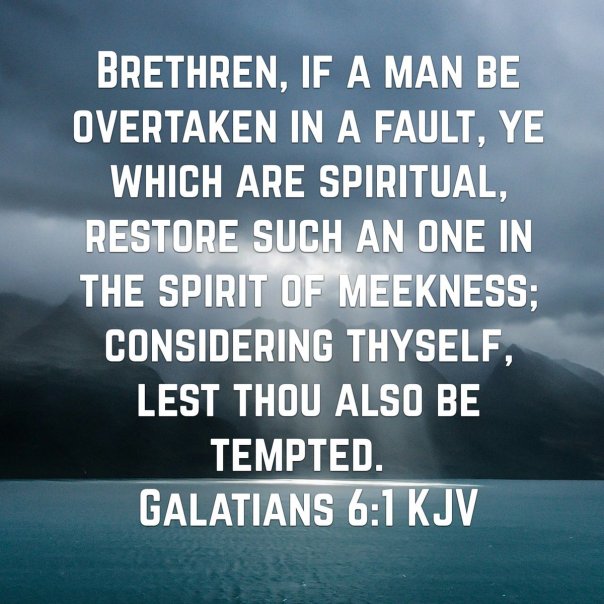 “Brethren, if a man be overtaken in a fault, you which are spiritual, restore such an one in the spirit of meekness; considering yourself, lest you also be tempted.” Galatians 6:1

How often do we, those who profess to be spiritual, restore a Brother or Sister overtaken in a fault? Are we attempting to restore them in the spirit of meekness or are we offering a form of lip service while seeking to further hinder them in their fallen state? In reality, are we puffed up and yet to mourn them who have been overtaken and considered that they may be taken from among us?

“And you are puffed up, and have not rather mourned, that he that has done this deed might be taken away from among you.” 1 Corinthians 5:2

If we stop judging an unrepentant Brother and Sister overtaken in a fault according to their apparent circumstances but begin judging them righteously (John 7:24), the result will be mourning because we understand that they may be taken from among us and delivered unto satan for the destruction of the flesh that the spirit may be saved in the day of the Lord Jesus.

“To deliver such an one unto Satan for the destruction of the flesh, that the spirit may be saved in the day of the Lord Jesus. Your glorying is not good. Know you not that a little leaven leavens the whole lump?” 1 Corinthians 5:5-6

Satan is God’s instrument of chastisement for the rebellious Saint who won’t deny their own flesh and must be turned over to satan for the destruction of their flesh. Those who are spiritual will earnestly contend for the faith of the Brethren, the Christian values according to the Word of God, and attempt to restore such a one by calling them to repentance. We mourn from the depths of our soul that they may be taken from among us. We are not puffed up but recognize our own frailty.

“Am I therefore become your enemy, because I tell you the truth?” Galatians 4:16

Be careful not to further hinder a Child of God in their fallen state by judging what you see with the carnal eye. With what judgement we judge, we shall be judged (Matthew 7:2). When we judge righteously, those who are spiritual will consider the outcome of a rebellious and unrepentant heart. Jesus Christ paid a high price for the Child of God to be free from the power of sin. To see a Child of God overtaken with sin and unrepentant, those who are spiritual will mourn and pray for their faith…pray that it fail them not when satan is allowed to them as wheat (Luke 22:31).

The spiritual will stand flat footed, shoulders squared and call the backslidden to repentance.  Not being puffed up and executing further judgement and punishment according to denominational or other man made rules but restoring them in a spirit of meekness lest they be taken from among us for lack of repentance.

“13 For neither they themselves who are circumcised keep the law; but desire to have you circumcised, that they may glory in your flesh.

14 But God forbid that I should glory, save in the Cross of our Lord Jesus Christ, by whom the world is crucified unto me, and I unto the world.” Galatians 6:13-14

Do not glory in the flesh.  If not for the Cross of Jesus Christ, we too would be law breakers worthy of sin’s dominion and a devil’s hell.