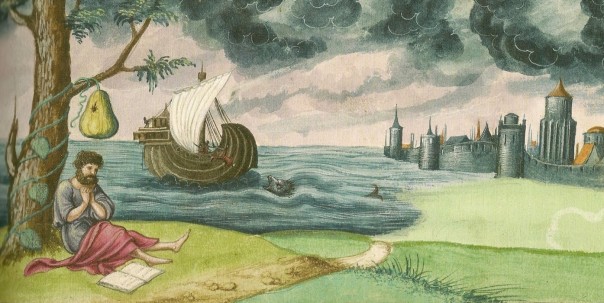 “6 And the Lord God prepared a gourd, and made it to come up over Jonah, that it might be a shadow over his head, to deliver him from his grief. So Jonah was exceeding glad of the gourd.

7 But God prepared a worm when the morning rose the next day, and it smote the gourd that it withered.

8 And it came to pass, when the sun did arise, that God prepared a vehement east wind; and the sun beat upon the head of Jonah, that he fainted, and wished in himself to die, and said, It is better for me to die than to live.” Jonah 4:6-8

Once Nineveh repented and God withdrew His wrath, Jonah went out of the city and pouted hoping to see Nineveh yet to be destroyed for their evil of which they had repented but destruction never came.  While Jonah was pouting, the Lord prepared a gourd to come up over Jonah’s head to shade him and he was exceedingly glad.

Not only did the Lord prepare the gourd, he also prepared a worm to destroy the gourd and a vehement east wind and the sun then beat upon the head of Jonah and he wished to die.

While Nineveh celebrated their blessing, Jonah pouted.  While Jonah pouted, God prepared…prepared to give and prepared to take away from Jonah.  God gave him shade and God took away his shade.  God’s mercy gives and God’s mercy takes away.  Jonah did not understand God’s pity on Nineveh upon their repentance; yet Jonah had pity on the gourd and was angry when it perished.

10 Then said the Lord, you have had pity on the gourd, for the which you have not labored, neither made it grow; which came up in a night, and perished in a night:

11 And should not I spare Nineveh, that great city, wherein are more than sixscore thousand persons that cannot discern between their right hand and their left hand; and also much cattle?” Jonah 4:9-10

Sometimes God will prepare us a gourd while we pout, so we will understand pity when He prepares that worm to take it away. Jonah could have been rejoicing with the Ninevites but instead he chose to pout.  Discern the gourd when it perishes. Seek understanding.  God gives and God takes away…blessed be the Name of the Lord Jesus Christ.