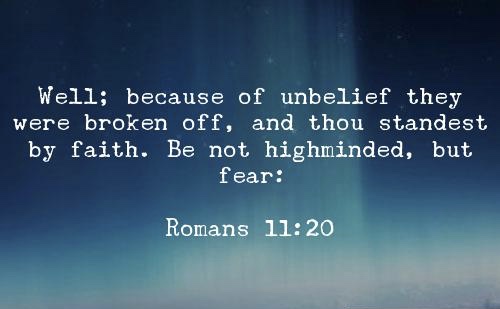 “20 Well; because of unbelief they were broken off, and you stand by faith. Be not highminded, but fear: 21 For if God spared not the natural branches, take heed lest He also spare not you.” Romans 11:20-21

The Israelites drew near to God with their mouths and honored Him with their lips but their hearts were far from Him (Matthew 15:8).  Their unbelief of God’s sufficiency to keep them caused them to be cut off.  They believed in God but they did not believe God. Remember, even the demons believe in God.  Sadly, even today, many sitting in church pews believe in God but they do not believe God.  Quite frankly, they rank right there with the demons themselves and bring reproach unto God.  These are the lukewarm; those who profess Christianity, yet do not believe.  The Word of God says He would rather them be cold than lukewarm.

Many do not understand the unbelief in their own hearts because religion has taught them their holiness is sustained by their own righteousness and the works that they must do to maintain such righteousness is the object of their faith…not the Cross of Christ.  They are not led by the Spirit of God but by their emotions and experiences.  Being swept to and fro, their faith in Jesus Christ for Salvation is in danger of destruction, which is the devil’s intent.

“12 Take heed, Brethren, lest there be in any of you an evil heart of unbelief, in departing from the living God. 13 But exhort one another daily, while it is called To day; lest any of you be hardened through the deceitfulness of sin.” Hebrews 3:12-13

Faith comes by hearing and hearing by the Word of God…not vain philosophies of man being taught as biblical doctrine.  Take heed.  Guard your heart. Be determined to know nothing else among you except Jesus Christ and Him crucified.