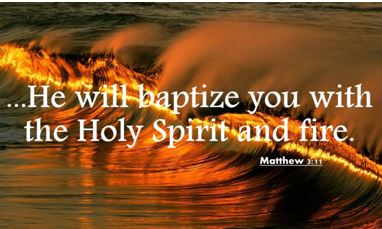 There is a difference in being “born of the Spirit” and “Baptized of the Spirit”.  At Salvation we are born of the Spirit.  We are Baptized into the death of Jesus, buried with Him in the likeness of His death; that like as Christ was raised up from the dead by the glory of the Father, even so we also should walk in newness of life.  Being justified freely through the Blood of Jesus Christ, we are freed from sin.  Sin has no more dominion over us. (Romans 6:1-23).

“4 And, being assembled together with them, commanded them that they should not depart from Jerusalem, but wait for the Promise of the Father, which, said He, you have heard of Me. 5 For John truly baptized with water; but you shall be baptized with the Holy Ghost not many days hence.” Acts 1:4-5

The last commandment Jesus gave to His followers and disciples was that they be baptized in the Holy Spirit.

“But you shall receive power, after that the Holy Ghost is come upon you: and you shall be witnesses unto Me both in Jerusalem, and in all Judaea, and in Samaria, and unto the uttermost part of the earth.” Acts 1:8.

“And when the day of Pentecost was fully come, they were all with one accord in one place. 2 And suddenly there came a sound from Heaven as of a rushing mighty wind, and it filled all the house where they were sitting. 3 And there appeared unto them cloven tongues like as of fire, and it sat upon each of them. 4 And they were all filled with the Holy Ghost, and began to speak with other tongues, as the Spirit gave them utterance.” Acts 2:1-4

Below are 5 occasions in Scripture of Believers being Baptized with the Holy Spirit.  Three of these times the Scripture specifically states the Believer spoke with other tongues, while the other two speaking in tongues is heavily implied.

In Acts 8:20-21, Simon the Sorcerer offered Peter and John money to receive this power and Peter replied, “…your money perish with you, because you have thought that the gift of God may be purchased with money. 21 You have neither part nor lot in this matter:…”.  In the Greek the word ‘matter’ is ‘logos’ which means word or speech.  Simon the Sorcerer had no part nor lot in this word/speech…in this utterance the Samarians were speaking.

“11 For with stammering lips and another tongue will he speak to this people. 12 To whom He said, This is the rest wherewith you may cause the weary to rest; and this is the refreshing: yet they would not hear.”  Isaiah 28:11-12

There is indeed a difference in being “born of the Spirit” and being “Baptized of the Spirit”.  There is a rest; a refreshing which edifies the Believer while praying in other tongues.  The Believer receives power to witness with the mighty Baptism of the Holy Spirit. Not all may understand this commandment given by the Lord Jesus Christ, nonetheless it is for whosoever will believe.

For those of us who have received the Baptism of the Holy Spirit with evidence of speaking in other tongues, no one can convince us this power to witness and refreshing is not true, for we know differently.  If you are interested in learning more regarding the Baptism of the Holy Spirit, I invite you to visit https://livinginthespirit.net/baptism-of-the-holy-spirit/.